What is an attenuation tank?

An attenuation tank collects and stores surface water run-off from large storm events or heavy rainfall. They are usually used for larger municipal or commercial applications.

The stored water inside the attenuation tank is released at a controlled rate to slow down the level of excess run-off before being released into a local water course such as a river, lake or reservoir. This minimises the risk of localised flooding - an increasing issue in the UK where sporadic torrential rain events are becoming more and more common.

How does an attenuation tank work?

Attenuation tanks work by collecting excess rainwater and retaining the overflow until it can be safely discharged into the environment.

By incorporating a flow-control chamber within the tank, the amount and velocity of rainwater / stormwater being pumped out into the drainage system can be controlled, thus greatly reducing the risk of flooding to the local area.

Pipes can then carry the water to various locations depending upon the needs of the site and local planning authorities. 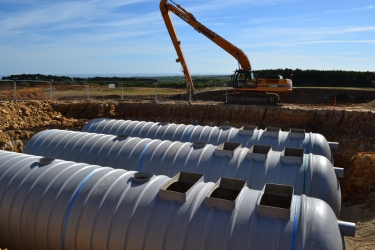 Protect your investment in your Rewatec attenuation tank by having it regularly inspected by a qualified service professional.

When your service provider visits your property to inspect your system, they should:

For over 50 years, we have proudly developed sustainable and long-lasting products that make a real difference for our customers, our professional partners, and, above all, our planet.

Our experience in the industry allows us to give you a 25 year warranty for our stormwater attenuation tanks.

At Premier Tech we provide a full range of training programmes to fully meet the requirements of our professional partners. If you require product functionality guidance or a more detailed training course for installations, we can provide a solution to meet your needs.

Contact our expert in your area for more information about the range of Rewatec attenuation tanks, additional treatment options, and accessories that are right for you.